When I'm out with my family and we go by a jobsite, I slow down if I'm driving.  Everybody rolls their eyes and my son says, "what's wrong THIS time, Dad?"  The answer is usually "So many things."

Today I was on my own, which meant I could get out of the car and take a close look.  Was I snooping?  Heck yes.  This is what made me pull over. 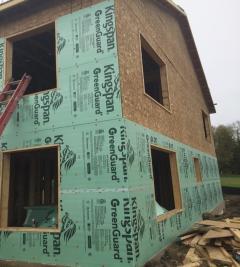 What caught my eye was the foam.  It's only an inch thick.

"An inch of foam" isn't in itself a problem, but it gets worse.

Look, people.  We live in a cold climate.  It's cold, and it's cold for a long time.  (I once touched a boiler pipe in a crawlspace in June and burned myself.  IN JUNE.)  It's also wet.  See the lake?

Exterior insulation ("outsulation") is a good thing.  It wraps the building nicely and serves to insulate all of the studs, too, instead of limiting the insulation to the spaces between the studs.  But it's dangerous when done wrong.

It's dangerous because when you wrap a building with plastic, it can't dry out.

It's dangerous because if the interior moisture isn't managed, the building will rot.

It's dangerous because if the sheathing is cold, moisture will condense on it, and then your wall will get wet and stay wet.

It's dangerous because mold can form in invisible places, where you'll never know it.  This can make you sick.

The worst of it is that risky practices are written into the Code: 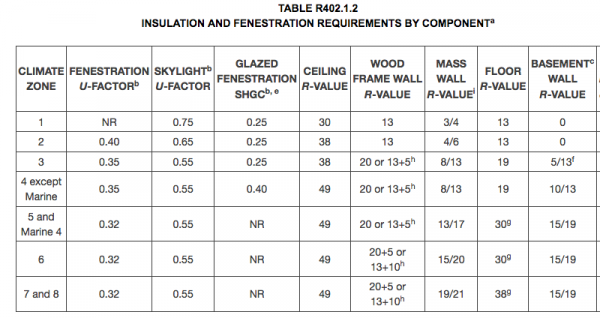 Today I was looking at a wall built with 2x6's (see pics below), which will probably be insulated with fiberglass in the cavities, for an R-value of R-20, and the whole thing is wrapped with one inch of extruded polystyrene foam (XPS), which has an R-value of 5.  So they did exactly what the code says.  A 20+5 wall.  This home will pass inspection.  Good for them!

Here's the problem.  The Code is wrong.  "How can it be wrong?" you ask.  It's because Codes are written by committees and there's a lot of lobbying by industry groups.  And then Codes are only changed every three years.  So if a problem creeps in, we don't know about it right away.  Did you ever hear the one about how "a camel is a horse designed by committee?"  It's more true than you know.  The "5" happens to be the R-value of one inch of XPS, which is commonly sold in stores.  Hmmm...

I doodled up a thing: 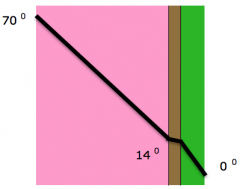 It's a temperature profile of the wall assembly.  The pink represents the fluffy insulation that'll probably get installed, the brown is the sheathing, and the green is the one inch of R-5 XPS.  It's all to scale.

In the winter, when it's 70 degrees inside and zero degrees outside, the temperature of the sheathing is about 14 degrees.  This happens because at different places in the wall, the temperature varies.  It doesn't go all-of-a-sudden from 70 to 0.  It drops off at a rate dictated by the R-values of the insulations.  (There are also ratios involved.)  14 degrees is "cold."  When there's moisture around, it condenses on cold things, so when moisture gets into the wall, it will condense on the sheathing...inside the wall.  When the sheathing is made out of oriented strand board, which is made out of wood fibers that have been pulled apart and glued back together, which is what this house is using, well, let's just say that that's an environment that's conducive to growing mold.  Inside your wall.  Where you can't see it.

See that?  A conscientous builder, following the Code, made a wall that is MORE likely to turn mushy.  Installing the foam plastic on the outside made it so the wall can't dry that way, so it's more likely to stay wetter longer.  It would be better if they didn't install the outsulation at all.  Without it, if the wall got wet, it could distribute its moisture outwards.  The moisture would go outside, where it belongs.

There are options.  One is to thicken the outsulation layer.  Let's say we tripled it, to 3" of XPS: 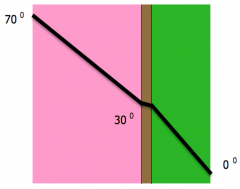 Same interior insulation levels, and now the temperature of the sheathing has jumped to around 30 degrees in this scenario.  Still not exactly ideal, but at least the condensation risk is smaller.

If we went farther and put all the insulation on the outside of the wall, with nothing inside the sheathing (no pink!), the sheathing stays at the interior temperature, which should be warm in the winter.  Moisture doesn't condense on warm things.

Wrapping a house with thin foam is risky.  Wrapping it with thick foam is better.  Controlling your interior moisture should be done no matter what.

Let's hope the family that moves into this house gets a lesson on how to live in it, but I doubt it.  (Who's in charge of writing the manual for "How To Live In A House," anyway?) 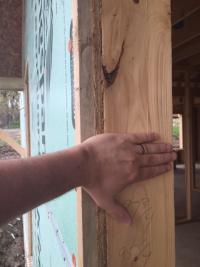 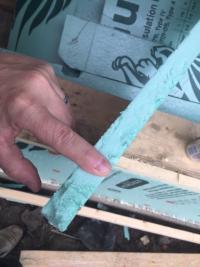 I've known Blake for 20 years and this is what I know to be true: He is authentic. Blake can't even pretend to be something he's not. Blake doesn't waste time. He values everyone's time, not just his own. Blake makes everything more efficient. He is make-your-head-spin smart. Blake is a nerd.