Do it right, or do it over

I helped some people out recently.  Here's the story.

New establishment, freshly built in the not-too-distant past.  Designed by an architect, engineered by engineers, and built by probably-not-the-low-bidder.  But definitely not the highest bidder.

A builder told me once that on a residential project, the homeowners are asked to make 100,000 decisions.  The questions keep coming, and fatigue sets in.  There's an initial excitement, but as the project moves along, it seems to drag, and you just want it done.  So you say anything, but not necessarily the "right" thing.

What happened in this scenario is that without anybody really knowing it, the end product suffered: the space overheats.  And in case you didn't notice, it's really hot outside.  Abnormally hot.  So they called me and said, "We think we need to add more air conditioning, but don't know.  Can you help?"

Here's the thing.  There's plenty of air conditioning.  But "air conditioning" is created by a system of parts.  There's the outside unit (the condenser), the indoor unit (the evaporator coil), the air handler (the fan-in-a-box), and the ductwork.  Typically what the low-bidding mechanical contractor does is connect them all up and hope it works.

AC is hard.  There's refrigerant, which is watched by the EPA because it's kind of a big deal.  How much of this ozone-depleting stuff do you need?  It relates to the size of the tubing connecting the things, the things themselves, the distance between all the things, and that means math.

There are the units themselves.  They need to match.  Imagine a V8 engine in a Prius.  That's just dumb.  (Awesome, but dumb.)  So that means reading the manual(s).

Then there's the ductwork.  Imagine that Prius, with a V8...and wheelbarrow tires.  Not-enough-ductwork is a common problem.  It can be like trying to drink a soda through a pinched straw.

So what's the solution?  Run a bunch of basic tests, analyze how the system is running, and probably add the third run of ductwork that was completely skipped/ignored during the install.  And did I mention that the system installed is totally different from what the engineers designed?  So now we're starting from scratch.  (And this is only the first page of the report.)  That low bidder just went and made stuff up.  They had a great set of plans to follow, and just didn't bother. 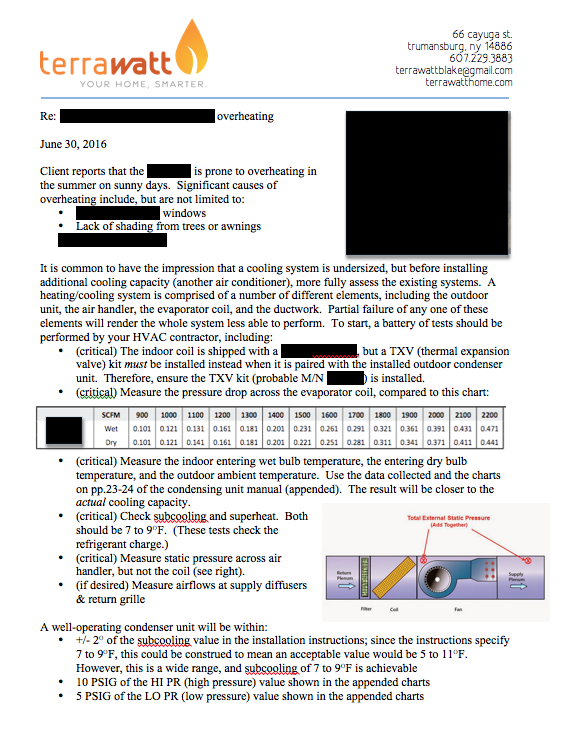 That low bidder didn't wind up being the lowest-cost solution after all.  It probably would've been cheaper to hire the GOOD bidder.

This happens all over.  I used to work in a big place that just celebrated its 40th anniversary.  It's sided ("clad") in pink rocks that came from Tennessee.  Those rocks are only about 40 years old...and they need to be replaced.  In case it's not obvious, that's a lot of rocks.

It's easy to blame inflation for cost-cutting, which could have led to installing too-thin rocks on the building.  It's easy to blame a stalled building timeline and then a rush to the finish.  It's easy to blame Congress...oh what the heck, let's blame Congress.  Because shaving a few dollars 40 years ago off of the budget means that it's going to cost ONE BILLION DOLLARS to fix.  (There's a lot wrong with the mechanical systems, too, but those typically have shorter lifetimes.  I think we got our money's worth out of those systems.)

When you pay less, you get less.  And then you pay again.  You might actually pay FOUR times: once to do it wrong, once to tear it out, and once to do it right.  And once somewhere in there for someone to come look at it, figure out what's wrong, and write the prescription.

"I really enjoyed watching you with the kids.  Thanks for supporting [our son] and hosting all the fun!"