Lately it seems like nobody knows what's going on with the world.

We agree on climate change, though, right?  Let's not re-hash that.  That's a global thing.  Locally, what does it mean?

I moved here nine years ago from the mid-Atlantic.  Everybody told me, "oooohhh, it's cold up there.  You're going to be really cold.  Hope you like the cold, ha ha!"  But you know what happened?  Right after I left, DC started getting hammered, every winter, with extreme snowfall.

Meanwhile, in the lovely Finger Lakes, it was pleasant.  Some snow shoveling but not much, some really cold nights but, all-in-all, not too many...it was nice.  And then the Polar Vortex slapped your windburned cheeks and spit sleet in your face.  Nobody liked that winter, no matter where you live.  The Polar Vortex was a bully.

This last winter was nuts.  Normally, our heating season lasts about nine months.  That means that on 75% of the days in a year, your heating system might kick on.  One year, I was in a crawlspace and I touched a boiler pipe and nearly burned myself.  In June.  But not this June.

A long string of not-so-bad winters, a Really Bad One, a mild one...what's this winter going to bring?  We used to know, but we don't know any more.  We just kinda wait and see.  We wait to see what it'll do, and then we react.  Everything's fine, until you get hit with that first propane bill and are reminded that you should probably make sure all your windows are closed. 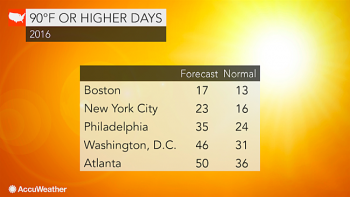 Me, I stacked my wood and today I'm cleaning out the wood stove.  June's a perfect time to get all this stuff done.  Get your chimney swept, get your furnace inspected, watch for the burn bans, and be reminded that this summer is probably going to be a lot hotter than you're used to.

I used to think I didn't need air conditioning because "it's air-conditioned all the time" here.  I used to say that, but I don't say it any more.  If you're feeling the need for AC, nobody will judge you.  AC's great - heck, it's used all over the country and was invented in upstate New York by a guy who has a sports dome named after him in Syracuse - and makes it possible to escape the weirdness that's going on outside.  It filters the air (great for your allergies!), cools it, dehumidifies it, makes it healthier...watch the news this summer and see how often you're warned about how unhealthy the outside is.

The trick is to get someone who knows what they're doing.  Make them do some math.  Just the tiniest bit, and some measuring, testing, & planning.  Make them show you their math.  Make them prove they've got the chops to make you comfortable and your house healthy.  Don't accept their rules of thumb - those aren't useful any more.  This is a thing, a large piece of equipment, that you'll have for a couple of decades, and you want it to work.  Don't be sold an air conditioner that's too big.  Don't be sold one that's too small.  Get one that's juuuuuust right and Goldilocks your way through the summer.

I've brought Blake in as a consultant on difficult jobs. He continues to impress me with his breadth of knowledge, excellent communication skills, and passion for building science. He's been an asset to my business, and I highly recommend his services. Joel Frank Carpentry