The Math On Solar Hot Water In Hawaii

I have friends.  They say it’s cheap!  It’s the most energy you can get from the sun!

The government says it’s a good idea.  Such a good idea that since 2010, Hawaii has REQUIRED a solar hot water (SHW) system on every new home built.  (There is an exception for on-demand water heaters but that’s a topic for another day.)

But advertisements aren’t facts, my friends live on the mainland, and the government is well-intentioned but that law is more than eight years old.  I have opinions, but I don’t know everything and love/hate to be proven wrong.  So let’s dive in. 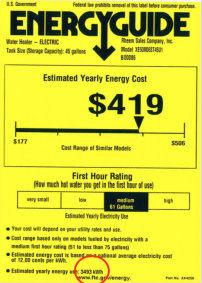 You own a house and need a new water heater.  I talked to a retired plumber and he said end-to-end, a standard 50-gallon electric tank is about $1500.  That price includes removal, disposal of the old unit, installation, tax, all materials, and in one year it will use 3500 kWh according to the sticker.  At current electric rates ($0.342/kWh) it will cost $1197 to operate for one year.  (Don't believe the "Estimated Yearly Energy Cost" on the yellow sticker, it uses mainland prices for energy.)

Another option is a heat pump water heater.  It’s an electric tank with a heat pump on top, just like what’s in refrigerators, AC units, and dehumidifiers.  So it’s not new technology, but there are moving parts that can break.  It would cost, installed, about $2400 BUT if you fill out a form from Hawai‘i Energy they’ll give you $300, so your cost is $2100. You might also get a federal tax credit of $300, which could make your cost $1800.  In one year it will use 950 kWh, at a cost of $325.

The “total cost” of the standard electric tank (the unit, plus the electricity to run it), for one year, is $2697.  The total cost of the heat pump water heater is $2125.  WITHOUT the rebate and credit, the heat pump water heater costs about $2725 - same as the standard tank.  The rebate and credit are just icing on the water heater cake.  After that, you’d save another $870 every year in lower operating costs.  That’s almost $2.40 per day!

Solar hot water is more complicated.  The sun doesn’t shine at night, and sometimes you need hot water at night, so a SHW system is connected to an electric booster tank.  You might not get all your hot water from the sun.  A “passive” system is piped so your water is preheated on your roof before it goes to the tank.  There are no pumps and no moving parts.  (An “active” system costs more and has pumps that can break.)  A professional needs to install it.

Using numbers I got from a local reputable installer (and a Hawai‘i Energy Clean Energy Ally, like me), a run-of-the-mill system costs $6900 + tax = $7187 and it’s reasonable to expect that it could cut your hot water energy usage by up to 90%.  Some people have 100% of their hot water covered, and there’s no real formula because there are too many variables.  But 90% is more-than-halfway-between “half” and “all” and feels fair to the solar hot water folks so we’ll use it.  It's also what the experience shows...after all, SHW's been installed for a long time so there are a lot of data points.

Over 15 years, the SHW saves thousands of dollars.  In the beginning, the heat pump costs less, but after about 3 years the math shifts in favor of SHW.

The heat pump isn’t perfect.  It has a fan and compressor (like a fridge) that make noise, so it’s nice to put it in a garage.  If it’s inside it can be bothersome.  Only the 50-gallon models are eligible for credits.  We didn’t account for future increases in the cost of electricity.  The math is based on a professional installation and “a family of three;” the larger your family, or the higher your hot water use, the less benefit you’d get from a heat pump.  If you install one yourself, it takes about a decade for the SHW to pull ahead economically.  They have a 10-year warranty for a reason.  After that, if it breaks, you're looking at buying a new tank.

The SHW isn’t perfect either.  Its economics depend on tax credits, and those are shrinking – they also assume your tax bill’s big enough to get a credit.  What if you have low taxes because you don’t make very much?  It could take years for the tax credits to carry over until they’re used up.  So there’s a higher upfront cost to a SHW system, but there’s 0% financing so that’s not really a problem...but a lot of people don't like borrowing.  You can have an 80-gallon tank though, plenty of hot water.  They go on roofs and are heavy, so your roof needs to be able to handle it.  You might need a new roof before you get a SHW system, so a "water heater" project can turn into a "roof" project, ballooning costs.

But whatever you do…DON'T BUY THE CHEAP TANK.  It’ll cost you THOUSANDS more.

Need help figuring out a system that's right for you?  Get in touch.