I was at a home show this weekend and counted half-a-dozen solar companies.  It's a booming business!  Hawaii's great for solar because we get a lot of sun and Hawaii has the most expensive electricity in the country.  The economics work better here than pretty much anywhere in the U.S.

Take a look at this array on a house I visited:

solar "panels" are called "modules" in the solar biz

It was installed by a reputable company in a quality manner and covers 100% of their electricity usage.  It's pretty awesome.  The more solar, the better!  Every bit of renewable energy you buy is fed into the grid and helps all of us.  Thank you!

It's especially important since the Big Island lost much of its renewable generation due to the eruption.  We used to have a geothermal plant...now we don't.  (But we might get it back.)  If we don't add more solar, then the tanker ships full of expensive oil will keep coming, and that cost gets passed on to...us.  Look at how much of our electricity is generated from burning oil:

The "other" is mostly Puna Geothermal Ventures, which isn't currently operating but maybe we'll get it back...? In the meantime, the slack is being picked up by burning dead-dinosaurs-I-mean-petroleum.

One of the things I like about solar is that it's formulaic.  A good solar proposal is one that sizes a system to fit your usage.  Not too big, not too small.  But it looks at what you WERE using, not what you WILL use.  Thinking about adding an electric car or air conditioning?  A right-sized system installed today will be too small tomorrow.

Have old light bulbs?  If you install a right-sized solar array today, and then change out your light bulbs to LEDs, your system will be too big.  And since we can't do net-metering any more, the extra power your system produces goes back into the grid...and HELCO sells it.  HELCO makes money off of too-big systems, and they don't pay you for it.  Not any more.  You're now one of their power plants.  Did they send you a check?

Are you getting the sense that they allowed net-metering because it was profitable...for them?

Is it any wonder they allow too-big systems?

You get that money back when you file your taxes.  In the meantime, you're loaning the government a lot of money, interest-free.

Yeah, I know you can finance a solar system.  If you don't mind paying interest.

I went to a house on the dry side of Waimea that DOESN'T have solar.  The homeowner had a question about their proposal for solar, which was to put 30 modules on the roof:

This house was great!  It was the first one I've visited that I consider to be "solar-ready."  I found no opportunities to "reduce the use before they produce!"  First time ever!  That meant that I could take their existing usage to help size an array: 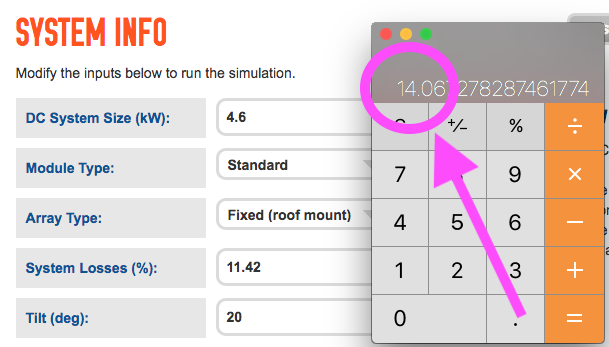 Huh...14 modules.  That seemed like a big difference from "30 modules" so the homeowner requested a second opinion from another Local Reputable Solar Installer, and they came back with a proposal for...also 14 modules.  Less than HALF the size of the other proposal.

Which one would you choose?

There's so much buzz around solar, but it comes with so many strings.  HELCO's protective of the grid (rightly so), there are tax credits (but they're fading), and over time new technologies have entered the mix.  Things change, rapidly, and sometimes it's hard to know if you're getting a good deal.

I'm pro-solar.  But if you're thinking about solar, and you're hot, and want air conditioning or an electric car...should we size an array for what you have now, or what you could have?

Back to that array at the beginning.  If I had visited that house before the array had gone on, here's what it would have looked like:

We could have avoided the cost of 7 modules.

I was too late.  These homeowners could have had solar to cover 100% of their usage, AND:

Which option would you choose?  The "solar" option, or the "solar+UPGRADES" option?  They're the same price!

Everything in your house is related.  So if you are thinking about getting on the solar coaster, or  AC or a water heater or insulation or an electric car or a whole-house dehumidifier, get in touch.  We'll figure out if solar is right for you "now," or right for you "later."  I offer independent, customized recommendations which could save you thousands of dollars.  It's a double-check.

Already have solar but still paying a HELCO bill?  There's room to work.  Maybe we can do something to your house that'll bring your too-small system up to speed.

"Solar" is one piece of your house's energy puzzle.  Just one.

Let's make sure it fits with the other pieces.

The Math on Solar Hot Water in Hawaii

I've known Blake for more than 25 years. I hate Blake. Blake is who I would be if I were smarter, better looking, and a hell of a lot more efficient.